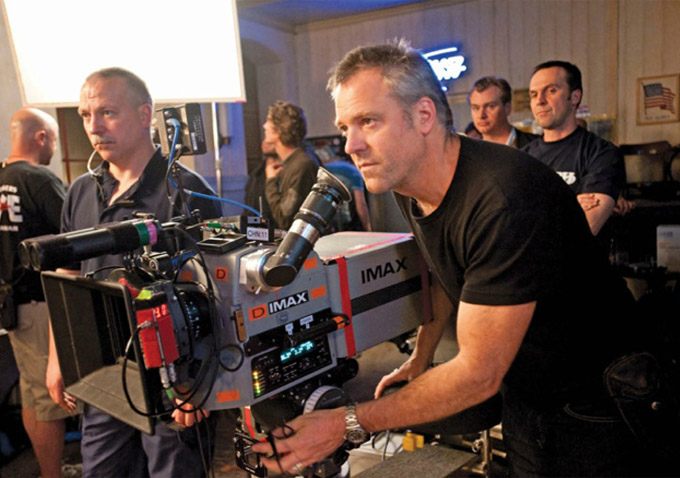 When much of the film world was going digital, Christopher Nolan and Wally began to experiment with large-format IMAX cameras. They had used the IMAX format for some of the visual tricks on The Prestige, and Wally was excited to try shooting more on The Dark Knight and The Dark Knight Rises. Wally did lots of tests with lighting and specially created IMAX lenses, which have a massive frame and shallow depth of field.

Just after The Dark Knight, Wally was hired to DP Moneyball with director Bennett Miller. He decided to take a more dramatic and moody approach for lighting the baseball games, rather than using conventional, flat stadium lighting. After doing some tests, he was able to convince Miller that the scenes still looked like a baseball stadium, only better.

Once Wally saw the script for Inception, he knew there would be several logistical challenges: shooting hand-held chase scenes in the snow, and of course, the rotating hallway scene. Christopher Nolan still preferred to do most of what was seen on-screen in camera, as a practical effect rather than with computer generated VFX added later. Nolan wanted a James Bond aesthetic for the film, with naturalistic lighting and a loose, hand-held feel. It was Wally and Nolan’s sixth film as a team, so it was easy to work together during pre-production, even while working out the most technical scenes. A huge rotating rig was built for the famous gravity-defying hallway scene. (Here’s a BTS video of the making of the scene.) Wally installed practical lighting into the rotating cylindrical set, with one camera affixed to the floor, so it does not appear to rotate, and a second camera that rotated with the set.

Wally won the Academy Award for Best Cinematography for Inception, after being nominated four times. It was a huge honor, and he was very proud of his work on the film. Once he’d won, it changed his life- so much so, he decided to move into directing. He directed his first feature film, Trancendence, starring Johnny Depp and executive produced by Nolan. It was a huge challenge for him to let go of being in control of the photography and to find the right DP and a good camera operator. Since directing Trancendence, Wally has enjoyed directing commercials. But on set, he’ll still act as director of photography, lighting the sets, and directing the actors and the camera operator while watching on the monitors.

Close Focus: A discussion of the theatrical release box office numbers during the pandemic. This week’s box office winner, Freaky, made only $1.2 million. Wonder Woman 1984 will be released day and date, in theaters and HBO Max- the first big tentpole movie to do so.

Ben’s short end: Interested viewers might want to watch famed documentarian and our upcoming guest, Frederick Wiseman’s work. Most of his films can be found on Kanopy. such as Titticut Follies, Zoo, or High School. His most recent work is City Hall, which you can pay to see through theaters like Coolidge Corner Theater and Film Forum.

Illya’s short end: The Pandemic Players, a group of stage and screen actors, are donating their time and talent to help those in need. They will be doing a free table read, with a suggested donation, of Raising Arizona starring Zachary Levi and Alison Pill staring Nov. 25-29.

Director Barry Alexander Brown on his film Son of the South, a civil rights movie inspired by the life of activist Bob Zellner